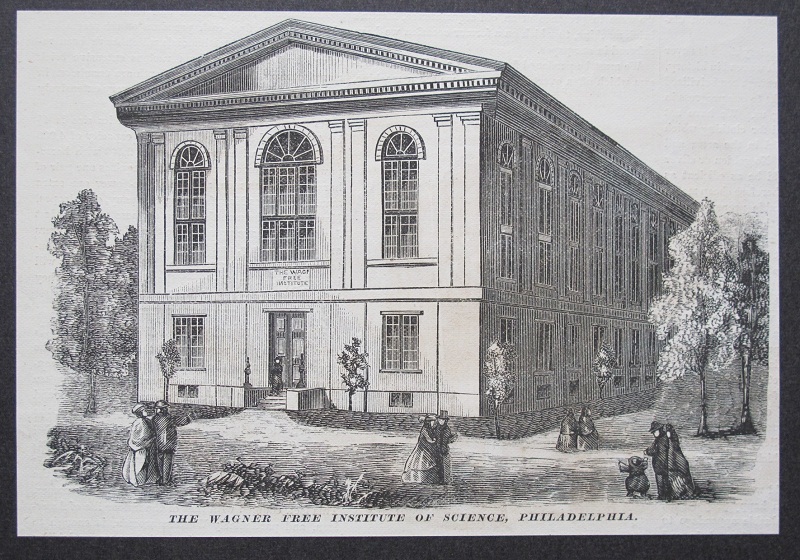 Wagner Free Institute of Science, from 'Manufacturer and Builder' (1874). Image available in the public domain.

The Wagner Free Institute of Science has its origins in the adult education movement which had started in 1821 in Great Britain with the foundation of the Edinburgh School of Arts, a similar movement developing only very slightly later in the United States. Philadelphia was a thriving commercial city by the first half of the nineteenth century; culturally some institutions, including the Library Company (1721), the University of Pennsylvania (1740) and the American Philosophical Society (1743) had been established pre-Independence. These catered for the middle, educated classes. The Franklin Institute for the Promotion of the Mechanic Arts, founded 1824, was more in the nature of a British mechanics institute. William Wagner (1796-1885), a Philadelphian of German descent, felt that there was a need to provide more educational opportunities for working people. He had become wealthy as a merchant in the lumber trade and he had a passion for natural history. In 1840 he sold his business, which provided him with sufficient capital to live the remainder of his life as a gentleman and philanthropist.

In 1843, Wagner purchased an estate to the north-west of Philadelphia and his embryo institute and museum were initially to develop there for “the free dispersion of scientific knowledge among the citizens of his native city.” In 1847 he offered a “Course of Lectures on Mineralogy, treated Chemically & Metallurgically… Illustrated by Specimens” and he later developed further courses on geology, mineralogy, and conchology. All the while, he was creating large collections. In 1855 he handed these over to trustees, teaching resources which by this stage also included “a library, philosophical apparatus, extensive assortments of diagrams illustrating geological phenomena, maps and cabinet cases.”

From 1859 to 1865, a fine purpose-built institute was constructed in neo-classical style, and it survives to this day. It originally included a library, classrooms, a lecture theatre and a large museum hall for natural history on the upper level. Following Wagner’s death in 1885, the building was somewhat remodelled and the museum was revised under the supervision of Joseph Leidy (1823-1891), professor of anatomy at the University of Pennsylvania. It is this reorganised display which is the basis of today’s museum and it is a remarkable survival: very few of today’s museum presentations can be seen to follow the organisation of a nineteenth-century display so closely. Most specimens are presented in cherry wood cases constructed in the 1880s and many retain the original handwritten curators’ labels. A particular strength is the collection of fossils from American sites, many of them collected by Wagner himself (see Earle E Spamer and Catherine A Forster A Collection of Type Fossils in the Wagner Free Institute… with a History of Paleontology at the Institute (Philadelphia 1988)). Sadly, the philosophical instrument collection, used for teaching by demonstration, is much diminished. The ground floor of the building, which includes the library and lecture theatre, has a splendid varnished-wood, Victorian quality about it. Lecture courses on scientific subjects continue to the present day, though they are now organised at a number of sites around the city as well as in the original building. The serial Transactions of the Wagner Free Institute of Science commenced publication in 1887, though it appeared irregularly.

The Wagner Free Institute survives in a somewhat run-down part of the city and is best visited by taxi.